The Background and Its Current State

The way we create energy today has had detrimental effects on the Earth. Every year, coal power stations are burning million tons of fuel hurting the environment through excess carbon dioxide emissions. Eventually, even this way of creating energy for our daily tasks will soon become obsolete for we only have a limited amount of coal to burn and fuel to make. It’s just not sustainable the way it is and an alternative for a more sustained planet is required. This is where the discussion about nuclear fusion as a sustainable energy source came into being. 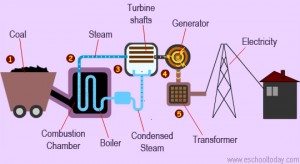 During this process, there is a lot of excess carbon dioxide being released and the transport of this energy causes even more strain for the environment. Overall, this process can be streamlined and many scientists are hoping that it is through nuclear fusion.

Now, What Is Nuclear Fusion?

According to ITER, (what exactly ITER is comes further down), fusion is the process at the core of our Sun. What we see as light and feel as warmth is the result of a fusion reaction: hydrogen nuclei collide, fuse into heavier helium atoms and release tremendous amounts of energy in the process. Another way to explain fusion is describing fusion as the reason why our sun keeps shining the way it does. Deep down in the sun’s core, there are lots and lots of electrons and protons. Under the extreme conditions within its core, protons join together and in the process, release energy (and lots of it!). For a more interactive and visual medium of understanding nuclear fusion, please see below: (Time Frame: 3:30 to 4:20 provides a good overview of fusion and fission!)

How Is Energy Created Through Fusion (In Space)?

Short answer: Through the movement of atoms and atoms fusing together. In a hot environment such as the sun, which reaches temperatures of 15,000,000° Celsius, hydrogen atoms are constantly on the move (and moving at very, very fast paces). Although the positive charges within the hydrogen atoms naturally lead them to repel, these repulsions are overcome due to the momentum at which they’re moving and the hydrogen atoms end up fusing, creating helium. The force is created due to the velocity of the fast paced electrons and that movement naturally creates an overwhelming force that leads to the fusion of the atoms. This whole process produces expansive amounts of energy and the sun does this process at a rate of 600 million tons of hydrogen into helium every single second, creating an overall great net of energy.

How May Energy Be Created Through Fusion (On Earth)?

It’s quite a different process to create fusion energy on Earth. One thing scientists have to take into account is that in its natural state, nuclear fusion occurs at the sun’s core meaning that it is impossible to truly recreate this environment in order to achieve the same gains as in space. For example, in the sun’s core, when electrons are separated from the nucleus, the nucleus plasma (a hot gas) is created. In this plasma environment, energy is yielded. Thus, in the ITER, in order to control the plasma, the fusion will be achieved in a tokamak (uses a magnetic field to confine a plasma in the shape of a torus [taken from here]) device where magnetic fields contain and control the plasma to keep the environment stable.

This is how fusion energy is essentially created on Earth and what the ITER aims to do:

(Steps and definitions above adapted from here) 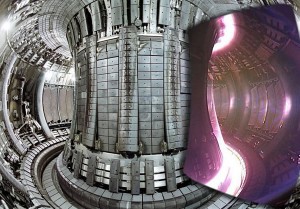 The process of a fusion reaction therefore, considering the immense energy created at the Sun’s core, can provide the creation of energy in a much more sustainable way than the burning of coal. In fact, Jeff Forshaw in his article in The Guardian, explains the extent to which nuclear fusion can provide energy compared to its current counterpart coal. Forshaw observes, “For every 100 tonnes of coal we burn, fusion has the potential to deliver the same amount of energy, without any carbon dioxide emission…” and goes onto explain how this can very much be a sufficient alternative to our current energy production methods.

Some of the most significant benefits of going this route (nuclear fusion) for sustainable energy are:

Now that we know a little background about what nuclear fusion is and how it relates to our world, let’s shift our focus to the main focus of implementing nuclear fusion as a sustainable energy source via the International Thermonuclear Experimental Reactor (ITER).

According to Brittanica: In E = mc2 , Einstein concluded that mass (m) and kinetic energy (E) are equal, since the speed of light(c2) is constant. In other words, mass can be changed into energy, and energy can be changed into mass. The former process is demonstrated by the production of nuclear energy—particles are smashed and their energy is captured. The latter process, the conversion of energy into mass, is demonstrated by the process of particle acceleration, in which low-mass particles zipping through a device collide to form larger particles.

What ITER and Nuclear Fusion aims to do is to convert mass into energy, the first part of what the equation tries to explain. Mass and energy are essentially two sides of the same coin and thus, can be switched into one another. There are masses that are present within the tokamak such as the hydrogen atoms and electrons moving at very high paces. Through the Nuclear Fusion process, this energy is aimed to be converted into sustainable energy that may be used for day to day consumption.

For a more in-depth look at Einstein’s theory and its effect on the advancement of Nuclear Fusion, please look at:

ITER is essentially a very large-scale science experiment aimed to determine if it is feasible to use fusion energy as a legitimate energy source. According to their website, the ITER project has a goal of delivering ten times the power it consumes back as usable energy. Hypothetically, if the ITER machine is inputted with 75 MW of power, ITER should be able to produce upwards of 750 MW of fusion power resulting in a net energy gain—first of its kind to produce net energy (Enjoy ITER’s visual for this goal below!). Currently (with the most recent updates), the ITER machine is capable of inputting 50 MW of power ending up with 500 MW of fusion power. Even with this input and output combination, the ITER is still able to produce a net energy gain. If done at higher frequencies as expected, the energy will be abundant enough for use. Essentially, ITER aims to answer one of the biggest and most important questions of our time: Is it possible to capture fusion energy for commercial usage here on Earth?

Construction for the ITER began in 2007 and were divided into two phases: clearing of the land and levelling for construction of buildings and physical capital. The ITER is being situated in 180 hectares of land in southern France.

The clearing of 180 hectares of land, the first phase, took over one year to complete. During this process, they have tried very hard to protect local fauna and flora which were present long before the proposal to build ITER came into fruition. 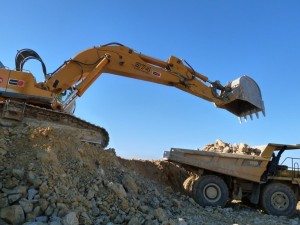 Leveling of the acreage began in March 2008 lasting for one year total. The leveling has led to a near perfect flat platform where construction can now begin (315 meters above sea level). To achieve this near perfect flat surface, more than 2.5 million meters of rubble were removed. 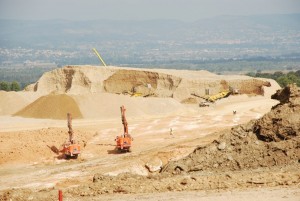 Above are just the early phases of this massive project. Please see below for the other major phases to finally getting this ITER built. 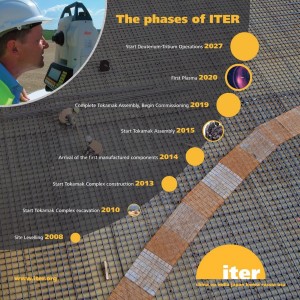 Looking to the Future: DEMO

ITER is not the end for fusion energy. ITER is a bridge to the first plant (Demonstration Power Plant=DEMO) that will actually be the place where production of large-scale electricity will occur. DEMO’s conceptual design is planned to be completed in 2017. If ITER’s aims are achieved, DEMO will lead our already technology advanced world into a new generation: the Age of Fusion. As early as 2040, fusion energy could be at the helm leading the way. Or, at least, that’s the hope.

To be completely honest, as I did my research, I didn’t believe in this process at all. The methods we use now to make energy seemed like the only viable options for our time. Considering that fusion takes place in very hot and dense environments within the Sun’s core, the likelihood of that same fusion here on Earth was a far fetch for me.

However, I am one to say that I believe nuclear fusion here on Earth is a viable method for sustainable energy in the near future. I believe that the strides that have been taken are tremendous and the years of research has paid off significantly. Considering that this field of research has yielded lots of failures and very few successes, it seems that the researchers and main players within the field are well equipped with the knowledge to move forward. The process is not simple but even within this complex process, progress is being made. As stated by Steven Cowley, director of the Culham Centre for Fusion Energy near Abingdon in the UK, “We have waited 60 years to get close to controlled fusion. We are now close in both magnetic and inertial. We must keep at it. The engineering milestone is when the whole plant produces more energy than it consumes.” With this progress, the whole project seems all the more viable.

In comparison to other methods of sustainable energy, this method is easily the most efficient and effective in producing the most day to day energy consumption without hurting the Earth as we are right now with our current methods. Instead of burning coal, we can produce the same amount of energy or even more without the consequences of the the destructive coaling process. Some places of the country use coal because it is an abundant source but with nuclear fusion, the compounds and break downs of certain atoms in a controlled environment leads to energy production. With the ITER machine, we are able to do this in large amounts that can be used as an alternative sustainable energy source.

In order to see the efforts and progress being made, please take a look at this link:

Nuclear fusion will take us into the new generation of sustainable energy. It’s just a matter of time.

(All other sources are embedded within blog)

5 thoughts on “Has Nuclear Fusion Taken The Forefront in Sustainable Energy?”