Recycling, most renownly recognized by the 3 R’s of reduced, reuse, recycle, is a process of converting waste materials into new, usable products. Not only do we think about recycling as a beneficiary by its removing waste products from landfills, but it also has shown signs of reducing air pollution and water pollution. Although recycling may be considered a crucial element to society, critics have recently shown that recycling is economically flawed and produces even greater levels of pollution than its original waste product.

Before we tie into the controversy of recycling, lets focus on some background information to gain a better perspective on the major issue. Recycling originated as far back as Plato in 400 BC [1]. There were sightings that household materials such as ash, broken tools, and pottery were being converted into other products. As time evolved into the pre-industrial era, there were signs that metals from Europe were melted and reused. With further technology came further recycling, with paper being recycling in 1031 by the Japanese selling repulped paper, as well as Britain’s using ash and coal as a basis to create bricks. However, recycling was extremely important during times of war. During WWII, almost every sort of metal seemed to be melted down for artillery, as well as taking kitchen oils, fats, and other ingredients for artillery lubrication. Here are some early recycling advertisement photos: 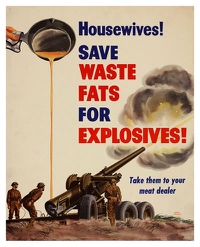 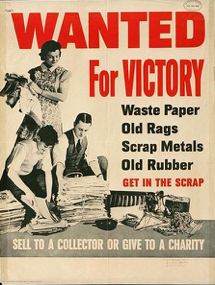 Now that we have examined the history, lets look at the modern uses and process before we focus on the controversies. Recycling occurs worldwide, reusing materials such as glass, paper, metal, plastic, textiles, and electronics. These materials can be recycled via a collection center, or curbside, where facilities further sort, clean, and reprocess the materials into something new and reusable. Curbside collection focuses on homeowners putting recycled materials into designated containers, which will then be picked up by a waste collection vehicle. Depending on the facility, the material is then sorted in a variety of ways depending on the technology, and then the materials are negotiated to buy-back centers which turn the processed material into a new recycled material. If you would like to see a more in depth video about curbside collection recycling, click here. The other type of recycling, known as drop-off centers, focuses on the waste producer to transport the recycled materials to a central location to be processed. Since this is more work for homeowners, it is less popular than curbside collection, which does not require any work from the homeowner. These types of recycling seem to be a lot of work. This is true, as the National Waste and Recycling Association (NWRA), reported in May 2015, that recycling and waste has employed 14,000 people through the recycling process. Here are images of each: 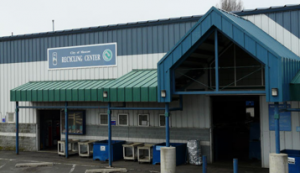 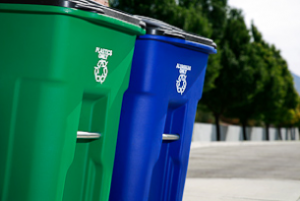 Now with a good amount of background information, less look at the debate of recycling. Critics have recently shown that recycling is economically flawed and produces even greater levels of pollution than its original waste product. But from the majority of articles that provide quantitative data, they say that recycling it a true benefit, but does not really provide any quantitative data. One resource that did provide quantitative data in a positive fashion was Discovery Magazine, which points out the following: “Recycling is generally far better than sending waste to landfills and relying on new raw materials to drive the consumer economy. It takes two-thirds less energy to make products from recycled plastic than from virgin plastic. By the last official measure in 2005, Americans recycle an estimated 32 percent of their total waste, which averages nearly a ton per person per year, around a third of which is plastic. Our recycling efforts save the greenhouse gas equivalent of removing 39.6 million cars from the road [3].” However, as this article continues, it points out that a variety of plastics cannot be recycled, ending up in landfills and just skipping the recycling process completely. As the article concludes, it determines that it is best to recycle, but make sure you purchase products that can be recycled.

But, the truth is, after scientific studies from people such as Alexander Volokh, a consumer research, he provides an explanation to why these items really are not recycled. 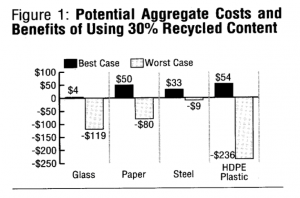 As you can see, it seems like the majority of items that end up in landfills can be recycled, its just the costs and risks are an issue. This idea seems to correlate with a trip to the Waste Management Facility of Dunmore PA, which is a single stream system of recycling, meaning it sorts through and decides if the materials can be recycled or placed in landfills. One of the managers at the facility said, “Some materials such as glass are useless to recycle because creating new glass is cheaper than recycling it.” This idea seems to examine the environmental issues in regards to potential business practices. When looking at a Waste management facility, it is important to recognize that this establishment is used solely for the purpose of creating profit: by not only using workers from the penitentiary so they can pay the workers 20 to 30 cents an hour, but to only recycle and resell items that create profit. When going to this plant, it is important to see that materials that do not provide profit are thrown in landfills, further creating problems such as polluting drinking water and taking up space that can be used for home or commercial development.

However, why recycling is the biggest misconception in American history is the fact that the majority of items that are in landfills can be recycled, it is just the fact that business do not want to recycle them because they will not generate greater profits for either the recycling plant or the company using the recycled materials to create new products. Instead, what can be done to turn this misconception into something beneficial is the idea that businesses should recycle all materials regardless of margins, and resell them to businesses. Businesses would slightly mark up the prices of the materials, or, it that is such a big concern, charge the same price and make slightly less margins. Although charging the same amount decreases profit, it more importantly decreases society’s material waste footprint in landfills across the world.

When looking at the energy costs, the documentary says that, “Does recycling save energy? No, because it increases energy use in transport, sorting, storing, and cleaning.” By creating more steps of transport, we are creating more air pollution. Similarly, by using more materials such as water to clean the recycled materials, we are creating more water pollution.  Furthermore, as the video continues, it puts monetary values about the costs between dumping waste directly into landfills and taking the waste through the recycling process. One researcher from this film concluded that, “It costs about $50 to $60 dollars a ton to take the trash to the landfill, whereas it costs between $150 to $160 to recycle the materials.” Does that sound worth it?

As we can see from a glance, recycling does have its issue, some much greater to the untrained eye. But now with this amount of information, the next question being asked is what can we do to fix this? One of the biggest issues seen as a college student is the background information we are taught about recycling. Essentially, students are told recycling is good, given no sources and or statistics. Instead, students should be given the information and determine if they think this process is good or bad. On another note, one should also look into how they can reduce their material waste footprint. According to earthday.org, they define ecological footprint as, “How much biologically productive land and sea is used by a given population or activity, and compares this to how much land and sea is available for human demands for food, fiber, timber, energy, and space for infrastructure” [5]. This may seem like a daunting task, but it can start with something small, such as bringing a reusable bag at the grocery store. In fact, ABC news points out the idea that by using a recyclable bag, some grocery stores give five to ten cents back for each used reused bag [6]. On a larger scale, companies or stores can look at rethinkrecycling’s website, which provides helpful suggestions to reduce one’s footprint such as composting food after a staff meeting, or go electric with mailing things as opposed to receiving physical copies of mail [7].

Like anything in society, business and processes have their positives and negatives. It is extremely important to note that recycling is not purely good or purely bad. Although the information provided above primarily sides with the idea recycling is bad, recycling does promote jobs and helped jumpstart the economy to a degree after the recession. However, it is important to not take anything said for granted or as fact, as the data above clearly shows that recycling is a more complex issue than first thought.

2 thoughts on “The Biggest Misconception in American History”