Modern-day science has provided humans with many different ways to generate power. Harnessing the power of wind to create energy is an extremely cost-effective and low-carbon technology among the options of energy production today. Wind power produces no greenhouse gases and can generate large amounts of power while using small amounts of land.¹

The average lifetime output of a wind turbine is 216 terajoules.²  This is equivalent to 277,778 kWh. The average American household consumes about 911 kWh per year. Therefore, over the course of it’s lifetime, a single wind turbine is capable of providing the yearly amount of required power for an entire year to approximately 305 homes.

How Do Wind Turbines Work?

Wind turbines convert the kinetic energy of wind into mechanical power. In simple terms, wind causes the blades of a wind turbine to turn, and these blades cause a shaft within a turbine to spin. This shaft is connected to a generator, which makes electricity.⁵ In order to view an interactive wind turbine and explore the parts of the system, click here.

The amount of power that is produced by a wind turbine is given by the equation:

In 1919, a German physicist name Robert Betz concluded that the maximum efficiency of a wind turbine in converting kinetic energy into mechanical energy by turning a rotor is 59.3 percent. This maximum power efficiency applies to all wind turbines ever created, no matter variations in design. This efficiency is often referred to as “Betz Limit” or “Betz’ Law”. However, it is impossible for wind turbines to operate at this maximum limit because of various engineering requirements and other factors that complete the wind turbine system. The actual efficiency of wind turbines typically ranges between 10 to 30 percent.⁷

Wind turbines have a net energy gain, meaning they produce more energy throughout their lifetime compared to the amount of energy needed to build the turbine itself. The formula used to calculate the energy return on investment for wind energy is:

The EROI of a wind turbine, which is expected to have a lifetime of about 20 years, typically ranges between 10 and 25 with an average of 16.² In comparison with other types of energy, wind power has a higher EROI than solar power (based on data from solar PV in Germany) and biomass, while it has a smaller EROI than coal and nuclear power, as displayed in the graph below:

Wind has many causes, such as the uneven heating of the atmosphere by the sun, irregularities of the earth’s surface, and the earth’s rotation. Therefore, the efficiency of a wind turbine varies depending on these variables, as the air flow which causes the turbine to generate energy varies on geographic location.⁵ Wind turbines are typically built on a land (preferably coastlines, where there is more wind) while some are built off-shore, about 10 km away from the coast.  Off-shore wind parks are able to produce more energy because of increased amounts of wind over the water, while they are more expensive to build and require more energy to transport the energy that they produce.²

The United States has the greatest installed, land-based wind energy capacity, while the United Kingdom has the greatest installed, off-shore wind energy capacity.⁶ There are currently no off-shore wind turbines in U.S. waters, but the United States Department of Energy has increased funding in order to increase availability of this technology.⁵ The Deepwater Wind project (which is discussed in the following paragraph) is making steps to create the first off-shore wind farm in the United States. The off-shore winds off the coasts of the U.S. provide a promising source of energy because of above average wind speeds. It is estimated that off-shore wind resources could provide the U.S. with over 4,000 gigawatts of power, which is about four times greater than the entire generating capacity currently carried on the U.S. electric grid.⁶ Below is a map of the United States which provides a rough estimate for the potential energy that could be generated from coastlines based on annual average wind speeds:

Deepwater Wind is a project headquartered in Providence, Rhode Island that is America’s leading off-shore wind developer. It is in the process of developing the Block Island Wind Farm, the first off-shore wind farm in the United States. Deepwater Wind won two competitive state solicitations to become the preferred offshore wind developer for the states of Rhode Island and New Jersey, and also succeeded in the first-ever competitive auction for offshore wind sites held by the U.S. government. Deepwater Wind has obtained over 35 billion dollars of assets in management, and plans to bring wind power to the coasts of New England, New Jersey, New York, and Oregon.¹²

Depending on the configuration of wind turbines and the spacing between them, the land required to generate wind power varies. Only 1-10% of the total area of wind farms is actually occupied by wind turbines, while the rest of the land is used for grazing, agriculture and recreation.¹ Below is a table that displays the land transformation for multiple wind power plants, measured in meters per gigawatt hour, compared to the land transformations of coal mining (taking into account all of the processes of the energy production systems). 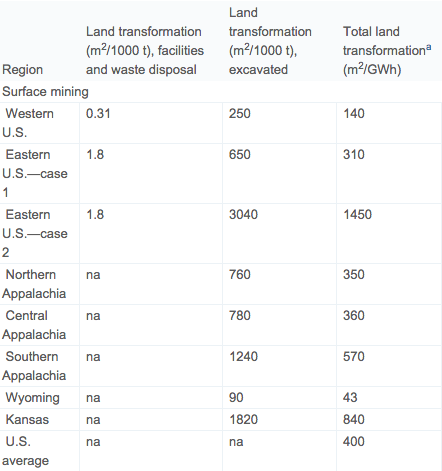 As American and European governments have been making steps to further the progress of wind power, increased funding has led to an increase in the size of wind farms. The expansion of wind farms must be done carefully in order to ensure that optimal turbine spacing is maintained. This is because an increased area of a wind farm results in a change in the drag forced induced by all of the turbines on the farm, thus possibly altering the equilibrium of the atmospheric surface layer.⁴

Considering the large amounts of power that can be harnessed from wind, one may wonder why wind power isn’t more popular than it is today. In the year 2014, wind was the source of only 1.8% of America’s total electrical energy consumption (renewable energy provides 10%, with wind energy being 18% of that), as displayed in this pie chart:

Scientists believe that a serious challenge that faces the expansion of wind power is it’s cost. Although the cost of wind power has decreased dramatically over the past decade, the technology to produce wind power still requires a higher initial investment than fossil-fueled generators. According to the EIA, the total cost of wind energy without federal tax and other financial incentives is about 9.7 cents/kilowatt-hour, while the total cost of conventional coal without federal tax and other financial incentives is less (about 9.4 cents/kilowatt-hour).⁸ According to eia.gov’s primary energy production by source graph, which can be viewed here, coal power production has been decreasing since the year 2007. I cannot find the cost per kWh of coal in the year 2007 (or any year before that), but because between 2007 and 2012 the amount of coal production in the U.S. decreased by 25 percent, and the overall price per kWh of electricity has actually risen since then, I can conclude that when coal was being produced in higher numbers in large scale plants the price of coal was even less costly than the previously stated number (9.4 cents/kWh).¹³

Another issue regarding wind power is that wind farms that are capable of producing a lot of energy are often located far away from large cities which need energy. In these cases, transmission lines must be used to transport the energy produced at the wind farm to the cities/areas of civilization, which requires additional costs and additional energy.⁹

Although wind turbines produce very little environmental pollution, those who object to wind power believe that the sound produced by the turbine blades and the overall presence of a large wind farm can negatively affect the “aesthetic” of large plots of land.  In addition, many environmental activists are upset by the threat to wildlife that wind turbines pose. During the early development of wind power in the United States, it was observed that many birds and bats had died from flying into turbine rotators.

According to the Office of Energy Efficiency and Renewable Energy, technological development in recent years and increased funding for research has greatly decreased the negative affects that turbines have on the ecosystems of the land on which they are located.⁹ However, a scientific study done in 2006 on a wind farm located in Zeebrugge, Belgium concluded that each turbine on the farm killed on average 19.1 birds every year and negatively altered the breeding grounds of local bird colonies.¹⁰ This study most likely offers a less biased perspective than the Office of Energy Efficiency and Renewable Energy, but was also done years before the claimed technological development occurred.  Animal activists have been outraged for many years about the deaths of rare species caused by turbines. Below is a news report from 2011 that displays the controversy surrounding wind turbines in the state of California:

Wind power, however, is not the only form of energy generation that has an impact on it’s surrounding environment. For example, solar power poses a danger to the environment in which PV panels are installed because the installation of large panels can cause a detrimental loss of habitat to native species from the area, can result in an interference with rainfall and damage, and can cause injury and death to wildlife who come into direct contact them.¹⁴ Non-renewable electricity generation sources are extremely dangerous to surrounding wildlife due to the chemicals that they emit. According to the New York State Energy Research and Development Authority, “the comparative amounts of SO2, NOx, CO2, and mercury emissions generated from coal, oil, natural gas, and hydro and the associated effects of acidic deposition, climate change, and mercury bioaccumulation, coal as an electricity generation source is by far the largest contributor to risks to wildlife found in the NY/NE region.” While a coal mine itself may not pose immediate physical danger to surrounding wildlife, the chemicals which the process of mining and burning coal produce greatly endanger animals because of the air that they breath (this not only affects wildlife, but the human race as well).¹⁵

While the effect that wind power has on ecosystems can be debated, it cannot be debated that wind power emits much less carbon dioxide, methane, and other dangerous greenhouse gases compared to other forms of energy generation. Wind power is a viable carbon-dioxide emissions free technology. If serious efforts are taken to mitigate climate change in the future, it is likely that the United States electricity sector will have to become dependent on wind power for the production of electricity in order to decrease carbon dioxide emissions.¹¹

2 thoughts on “Wind Power in the United States and Abroad”